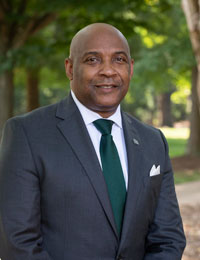 Bennie L. Harris, Ph.D., was named USC Upstate’s seventh chancellor after a competitive national search. Harris succeeds Brendan Kelly, who served from 2017-2020, and assumed his new post on July 1. Most recently, Harris served as senior vice president for Institutional Advancement at the Morehouse School of Medicine (MSM) in Atlanta, Georgia, a position he held since 2014. Prior to that, he was vice president for Development and Alumni Relations at Lipscomb University in Nashville, Tennessee.

As a senior vice president at MSM, Harris was a member of the executive leadership team. He co-chaired the institution’s five-year strategic plan and served as a key member in the development of the school’s Leadership Academy, a program designed to promote leadership among faculty and staff. He dramatically impacted the school’s fundraising outcomes, launching a $225 million comprehensive campaign and growing fundraising income to $112 million, an increase of more than 265% over six and a half years. MSM has received $177,309,691 in funding from the National Institutes of Health (NIH) since 2015.

As vice president for Development and Alumni Relations at Lipscomb University from 2007-2014, Harris provided strategic leadership in all areas of development, grants management, and alumni relations to include corporate, foundation and government relations, major and planned gifts, annual giving, donor stewardship and advancement services. Under his direction, fundraising increased by 332% within four years, climbing to $32,238,899 in FY2012 compared with $9,716,139 in FY2009.

< Return to Our Chancellor