Skip to main content
To ensure health and safety, masks are required in all campus facilities - Important Information About COVID-19 Testing, Vaccines and Resources

The history of the University of South Carolina Upstate is a chronicle of remarkable development.

When Spartanburg General Hospital announced it was phasing out its diploma program for registered nurses in 1967, a citizens' committee chaired by G.B. Hodge, M.D. requested that Spartanburg be included in the University of South Carolina system to avert a serious healthcare problem.

The Spartanburg Regional Campus, as it was first known, opened its doors in the fall of 1967 to 177 students on the first floor of the Spartanburg General Hospital nursing residence. Enrollment continued to increase, which resulted in the school becoming a four-year university in 1975. In 1994, the University began offering graduate degrees. Today's thriving campus boasts 330 acres and an enrollment of about 6,000 students.

The Honorable J. Derham Cole, Jr. has been selected to serve as interim chancellor while a national search is conducted for USC Upstate’s next chancellor.

A former State Representative for District 32 in Spartanburg County, Cole joined USC Upstate in 2018 as associate vice chancellor for finance and administration, bringing more than 15 years of business and law experience to his position. Since his arrival, he has become well-versed in the overarching goals of the university’s strategic plan and has worked closely with departments across campus to facilitate progress and a culture of continuous improvement.

USC Upstate’s profile externally has been fueled by optimism, coalition building and partnership. Cole has played a significant role in carrying this message to key community and legislative leaders whose support and vision are critical to USC Upstate’s success. His background as a lawmaker provides the university with a voice at the State House who can shepherd the projects that will ensure our growth.

In addition to his years of public service, Cole spent 15 years in private law practice, representing businesses on a variety of complex matters. He earned a B.S. in Business Economics from the University of South Carolina Honors College and a joint Juris Doctor/Master of International Business Studies from the University of South Carolina School of Law and the Moore School of Business.

Gov. Henry McMaster awarded Cole the Order of the Palmetto, South Carolina’s highest civilian honor, in 2018. He was named Legislator of the Year by the S.C. Human Service Providers Association in 2016. 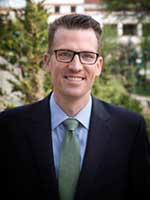 Optimism, energy and a bold new vision for the future are hallmarks of Dr. Brendan B. Kelly’s leadership since he became chancellor of the University of South Carolina Upstate in March 2017.

Chancellor Kelly and his executive team have continued to position USC Upstate as one of the top regional comprehensive universities in the Southeast—one that continues to create life-changing opportunities for students and the communities of the Palmetto State’s Upstate region and beyond.

During Kelly’s tenure, USC Upstate has been recognized by U.S. News and World Report as the No. 1 Top Public Regional University in the South, as the ninth-best baccalaureate college in the nation by Washington Monthly magazine, and as a College of Distinction.

As the head of the largest regional comprehensive university in the USC system, Kelly has implemented Up Together: USC Upstate Strategic Plan 2018-2023. The plan outlines three priorities: Providing rigorous, career-relevant and accessible education; enhancing the quality of life in Upstate South Carolina; and being a university of choice for faculty, staff, students, and the community.

Communications from the Chancellor 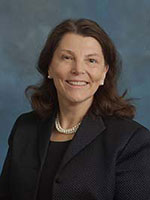 Mary Anne Fitzpatrick served as the interim chancellor of the University of South Carolina Upstate from August 1, 2016 to February 28, 2017 and is to be commended for the incredible leadership she provided to the University through a transitional time. Her vision and proven leadership helped USC Upstate continue to grow and prosper as a metropolitan university, benefiting not only the USC Upstate community, but the Upstate.

Her skills as an administrator and higher education leader proved to be invaluable in that she was able to facilitate the approval of the 2016 Faculty Manual that sets the framework for major shared governance, update the existing strategic plan, begin building a detailed and aggressive enrollment plan with the vision of reaching enrollment of 10,000 students by 2030, complete three-year faculty hiring plans, finalize the 2017-2018 budget that resulted in a balanced the budget based on existing resources, and complete all promotion and tenure recommendations.

Fitzpatrick returned to the University of South Carolina where she serves as the Vice President of System Planning and is responsible for ensuring and improving the quality, coordination, effectiveness and long-range planning for the University of South Carolina statewide system of eight campuses across 14 locations. She is also a Carolina Distinguished Professor of Psychology.

Fitzpatrick has served as the USC Columbia vice provost for special academic initiatives. She also served as the Dean of the College of Arts and Sciences at the University of South Carolina. She was recognized by the South Carolina legislature on July 7, 2015 (H 4367) for her outstanding and dedicated 10 years of service in that role.

Prior to her appointment at the University of South Carolina, Fitzpatrick served as Deputy Dean for the College of Letters and Science (2002-2004), Vice Provost and Special Assistant to the Chancellor (1999-2001) on Distributed Learning, and Senior Associate Dean in the College of Letters and Science (1997-2001) at the University of Wisconsin-Madison where she also held the WARF Kellett Professorship.

Prior to her appointment at the University of South Carolina, Fitzpatrick served as Deputy Dean for the College of Letters and Science (2002-2004), Vice Provost and Special Assistant to the Chancellor (1999-2001) on Distributed Learning, and Senior Associate Dean in the College of Letters and Science (1997-2001) at the University of Wisconsin-Madison where she also held the WARF Kellett Professorship. 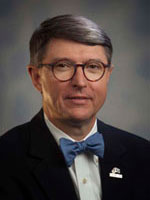 Dr. Thomas F. Moore served as chancellor of the University of South Carolina Upstate from 2011 to 2016, leading the University toward its highest student enrollment of 6,000 and the highest occupancy ever in student housing.

Under his leadership, the University took bold steps in community engagement in both Spartanburg and Greenville. The USC Upstate Child Protection Training Center was founded to provide exceptional training for child protection workers and a place to improve their skills in detection, reporting and responding. The UPSTATE Gallery on Main opened in downtown Spartanburg to showcase the permanent work of Andy Warhol and offers its visitors the opportunity to see a variety of contemporary, original exhibitions. An additional location at 501 River Street was established to provide a long-desired footprint in downtown Greenville and to allow for increased metropolitan engagement with the Greenville community. Each of these initiatives helped USC Upstate to fulfill its vision as one of the leading metropolitan universities in the Southeast.

Dr. Moore focused on access, affordability and accountability to USC Upstate throughout his tenure as chancellor. He promoted access to the highest quality educational experiences while remaining affordable by balancing tuition and merit- and need-based aid and being accountable to students, parents, the community and the world.

Prior to coming to USC Upstate, Dr. Moore served as vice president for academic affairs and dean of the faculty, chair of the department of chemistry and physics, director of the Master of Liberal Arts Program and dean of the College of Arts and Sciences at Winthrop University.

Dr. Moore earned his bachelor’s degree in chemistry from Huntingdon College and his doctorate in inorganic chemistry from the University of South Carolina. He has attended professional development programs at Harvard, Yale and Northwestern universities. 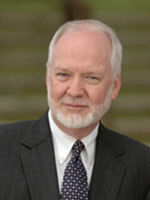 Dr. John C. Stockwell served as chancellor of the University of South Carolina Upstate from 1994 until 2011, steering the University toward its vision as one of the leading metropolitan universities in the Southeast.

Under his leadership, the University experienced outstanding growth in academic reputation, capital development and public/private partnerships. Enrollments doubled to more than 5,500 students to include a diverse student population with sixty nations represented in the campus community and a minority enrollment of thirty percent.

Chancellor Stockwell led the University toward completion of its campus master plan, approved by the USC Board of Trustees in 1997, which included multi-million dollar capital developments in classroom space, academic support facilities, housing, athletics facilities, and, most notably, the George Dean Johnson, Jr. College of Business and Economics in downtown Spartanburg. A number of beautification initiatives were completed across the 330-acre campus to complement the $50 million highway infrastructure project.

Dr. Stockwell earned his Ph.D. and Master’s degrees in theatre at Bowling Green State University, and his bachelor’s degree from Cedarville College. He is also an alumnus of the Harvard University Institute for Educational Management. 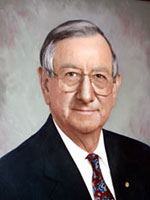 Prior to his appointment, Whitener had served as dean of the University of South Carolina-Union from 1977 until his retirement in 1984. At the time of his retirement, he was named the first dean emeritus of the campus.

Whitener, who passed away on November 13, 2012, is survived by his wife, Martha Pacolette Sarratt, have one daughter and two grandsons. 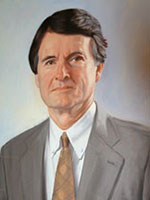 Dr. Olin B. Sansbury, Jr. served as director, vice president and finally as chancellor of the University of South Carolina Spartanburg (now USC Upstate) from 1973 to 1993. Under his supervision, the campus grew from an enrollment of 750 students to approximately 4,500 students, and from offering only associate's degrees to offering undergraduate degrees in thirty fields of study, as well as graduate programs in education.

Prior to his tenure at USC Upstate, Dr. Sansbury served as a faculty member and assistant director of student affairs at the University of South Carolina at Florence (now Francis Marion University), as dean of students at Francis Marion University and as assistant vice provost for student affairs at the USC Regional Campus System. He was honored by the City of Spartanburg for his contributions to the cause of higher education in South Carolina, and the date of April 21 in Spartanburg was named, "Olin Sansbury Day" in his honor.

Dr. Sansbury earned his Ph.D. in international studies from the University of South Carolina and his bachelor’s degree from Wofford College. He served in the United States Army and is a Veteran of the Vietnam War. Upon his retirement in 1993, Dr. Sansbury was granted the title of Chancellor Emeritus. 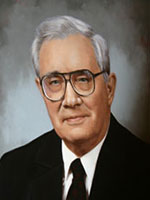 On July 1, 1967, Dr. Norbert A. Stirzaker was appointed the first director of the Spartanburg Regional Campus of the University of South Carolina, a role he held for approximately five years before returning to teaching.

During his career, Dr. Stirzaker served as a band director, public school music supervisor, professor of Education and department chair in social sciences at Rio Grande (Ohio) College, and Assistant Supervisor of Course Programs at the University of Michigan’s Extension Service. From 1961-67, he served as Director of Extension Services for the Indiana State University (Terre Haute) Adult Education program, and was instrumental in the development of the Evansville campus.