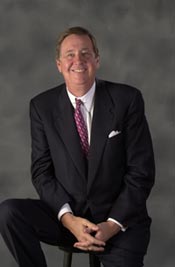 Born 1942 in Spartanburg, South Carolina, George D. Johnson, Jr., is the son of the late Dr. George Dean Johnson and the late Elizabeth Heath Johnson. Married in 1980 to Susan Phifer of Morganton, North Carolina, they have two children, a son, Geordy and a daughter, Susanna. Johnson is a member of Episcopal Church of the Advent in Spartanburg.

Johnson is founder and chairman of Johnson Development Associates, Inc., which develops self-storage facilities, industrial space, office space and apartments. He is a founder, former chief executive officer and a former director of Extended Stay America, Inc. He is a past president of the Domestic Consumer Division of Blockbuster Entertainment, a division of Viacom, Inc. He was formerly the managing general partner of WJB Video. He is a founder and past member of the Board of Directors of Advance America Cash Advance Centers, Inc. Johnson has more than 30 years of experience developing and managing various businesses.

Johnson was elected to the South Carolina House of Representatives in 1969 and served through 1974. In 1999, he was inducted into both the Nova Southeastern University Entrepreneurial Hall of Fame and the South Carolina Business Hall of Fame. He was a recipient of the Young Alumnus Distinguished Service Award given by Wofford College for the year 1973 and is a recent recipient of the United Way Daniel Morgan Award.