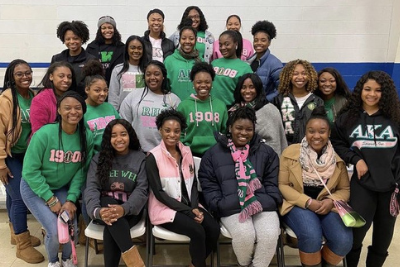 Alpha Kappa Alpha has succeeded in its organization and has lived up to the highest standards concerning Greek life. With over 290,000 college-trained members, it is bound by the bonds of sisterhood. Alpha Kappa Alpha is a sorority whose main goal is to give service to all mankind by merit and by culture.

The purpose of AKA is to cultivate high scholastic and ethical standards, to promote unity and friendship among college women, to study and help alleviate problems concerning girls and women in order to improve their social stature, to maintain a progressive interest in college life and to be of service to all mankind. Striving for excellence as the first black Greek-letter organization was something memorable to those who may have witnessed it. This organization was founded on the campus of Howard University in Washington, D.C. on Jan. 15, 1908. The sorority was incorporated on Jan. 29, 1913.

Its founders were among the fewer than 1,000 African- Americans enrolled in higher education institutions in 1908 and the 25 women who received Bachelor of Arts degrees from Howard University between 1908 and 1911. Nine juniors and seniors who constituted the initial core group of founding members and seven sophomores, who were extended an invitation for membership without initiation, comprised what are acknowledged as Alpha Kappa Alpha’s original 16 founders. The Rho Tau chapter was established on March 28, 1998, as the first black Greek-letter organization chartered at USC Upstate.