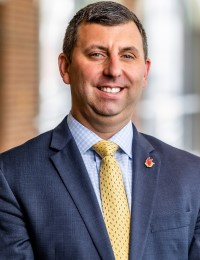 USC Upstate is pleased to announce that after a nationwide search R.J. Gimbl has been selected to serve as our new vice chancellor for university advancement and executive director of the USC Upstate Foundation.

R.J. will provide strategic leadership and oversight of the University Advancement team and work extensively to enhance fundraising outcomes for the university, elevate the profile of USC Upstate, and engage community partners. He will join us on May 23.

Prior to joining USC Upstate, R.J. served as associate vice president for university advancement at Winthrop University, charged with oversight for the areas of annual giving, major and planned gifts, advancement services and donor relations. Under his leadership, Winthrop achieved a milestone number of unrestricted annual gifts during 2018, while also reaching the second highest total for overall fundraising in 2019.

R.J. also served as president and CEO of the Fairmont State Foundation for three years, managing day-to-day operations and the fundraising efforts on behalf of Fairmont State University that resulted in expanding the annual giving program and building a pipeline of major gift prospects.

R.J. spent four years as director of major gifts for intercollegiate athletics at Pennsylvania State University, focusing on portfolio growth for athletics during the university’s $2 billion comprehensive campaign. Among his duties was directing and executing the fundraising plan for the $10 million Ice Campaign, securing endowments for the newly established men’s and women’s ice hockey programs. He previously served as Marshall University’s associate athletic director and executive director of the Big Green Scholarship Foundation overseeing development, and before that as assistant director of development at West Virginia University’s Foundation, directing the annual giving and ticket priority program for the Mountaineer Athletic Club.

R.J. holds a bachelor’s degree from Rutgers University and a master's in business administration from West Virginia University.